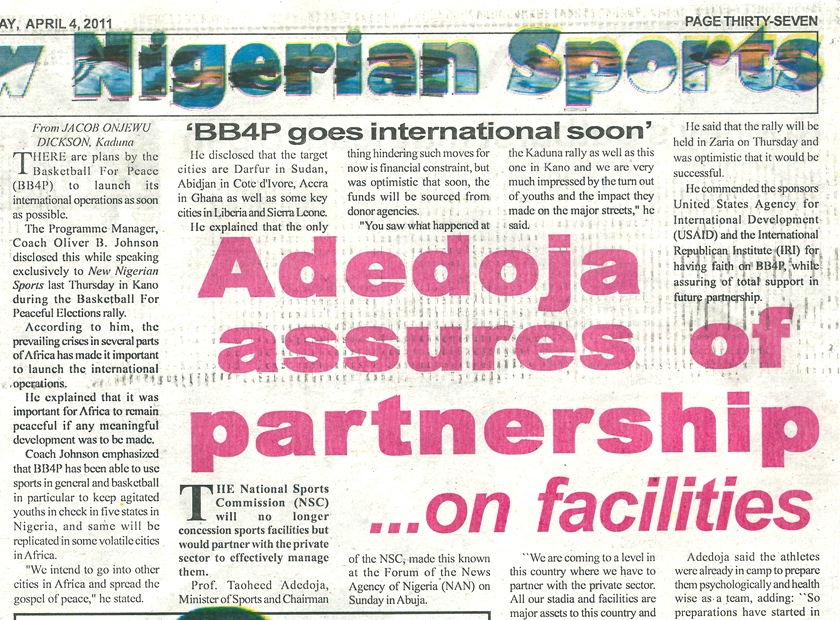 ANGUWAN ROGO PEACE ZONE
This peace zone is located along Bauchi Road.  It is populated by Muslims.  It was one of the most affected areas of the crisis and will be suitable for the peace programme.  It is located in Jos North LGA of the State.

ALHERI PEACE ZONE
This Peace Zone is located at YMC compound between Alheri and Rock Heaven metropolis.  It is also a populated area of both religion and it is a very suitable area for the BB4P programme.  It is also in Jos North LGA.

BUKURU PEACE ZONE
This Peace Zone is located in Zang Commercial College area of Bukuru.  It is also another venue that can be used for the BB4P programme due to the number of youth found around the neighborhood.  It is located in Jos South LGC and consists of both Muslims and Christians.

DADIN KOWA PEACE ZONE
This peace Zone is located at First Gate, Azi Nyako Youth Centre, another venue for the BB4P it was one of the affected area in Jos South LGC of the State.  Both religions are living any time.

JENTA ADAMU PEACE ZONE
This peace zone is located at te Police Field Jenta Adamu.  It is also suitable for the peace programme due to the number of youths found around that area and it is an area for both who are of both religions.  It is also in Jos North.

NASARAWA PEACE ZONE
This peace zone is located at Police Barrack Training Field. It was also affected by the crisis and it is also a very suitable and populated place for the BB4P Programme.  It is also an area of both religions and it is located in Jos North LGC.